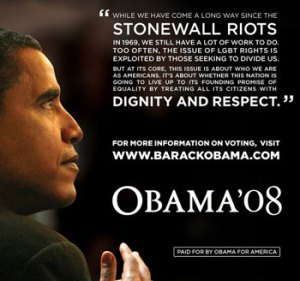 Obama is – ostensibly – a friend of gay folks in the U.S. Yet, gay folks from San Francisco to Burlington, Vermont are wondering what the hell is going on. “How could he,” the lament goes, “choose such a bible-thumping, right-wing hate-monger to deliver the invocation at his Inauguration? Isn’t the Obama Inauguration supposed to mark the beginning of a new era in American politics?”

Obama is a consensus builder. While he doesn’t shy away from alienating some Americans with very clear policy objectives that often lean left-of-center, he is symbolically invested in uniting the civic sphere through what he calls “disagreeing without being disagreeable.” One way of interpreting that phrase goes like this: Don’t be a jerk to people you don’t agree with, even if you really think their views are poopie and don’t make sense. Underneath our differences, there is something that we all share.” For Obama that “shared something” is our commitment to basic American values, values we all tacitly consent to by virtue of being born here and not going awol once we get the change. (Anyone feel the ex-patriot itch when you were studying abroad?)

Another way of reading Obama’s golden rule relies on the extremely relevant insights of Antonio Gramsci, the Italian Marxist who bequeathed to us one of the most powerful theoretical tools for understanding our present: hegemony.

As a consensus builder, Obama’s objective is to be the leader of all Americans, not just the blue-few who pounded the pavement for his campaign. That

means reaching out to folks he may chide in the privacy of his own home, and inviting them to see themselves as active participants in the public sphere, a place we can call, “The America Obama Built.” Rather than alienate and infuriate the socially conservative block of the electoriate by openly dismissing them, his approach (at least symbolically) includes them, even if such inclusion does not mean he will pursue policy objectives they may find favorable.  To be clear, there is typically some kind of advantage to being a part of the hegemonic block. It seems to me that the advantage in this case is that social conservatives gain a modicum of legitimacy in mainstream politics, which, as we all know, has pretty much eroded and was made a laughing stock thanks to the idiocy of the McPalin campaign.

This, my friends, is how hegemony works. The hegemonic political block is an assemblage. It is based on a principle of association and linkage, or articulation. It rules by inclusion rather than exclusion. It compels people to accept their subordination because it plays to, or maybe plays on, their feelings of relevance and a sense that they are not fully disinvested of influence. Whether or not such perceived relevance and influence plays out at the legislative register is yet to be seen.

While I am certainly not a proponent of Christianity-based politics and all of the myopic, antiquated, and unfriendly ways in which these faith-based claims enter the political arena, I am also not surprised, nor am I outraged by Obama’s move to include Rev. Warren. If my analysis about Obama’s political style is right, then this is just the beginning of a series of strange bedfellows rolling around together into the civic bed.

We lefties would do well to pay attention to legislation, judicial arguments and executive level policy, rather than fussing about these symbolic attempts to bridge ideological divides. Obama will continue to do this. We better make sure he continues to (or starts to) carry out the left-ish policy platform on which he campaigned.

(Ah, and for the Queer Alphabet Soupers – GLBT, etc. – Obama wasn’t very clear on gay marriage from the start. Yes to civil unions; No to gay marriage; States should decide marriage issues; Dignity for all; Ideological cliché, blah, blah, blah. All of this shit means I’m still getting screwed on federal taxes. Thanks, it feels great.)

Oh yeah, I was just reminded by Phil Brontein’s article in the Huffington Post of this disappointing bit political maneuvering: Janet Napolitano running Homeland Security. If you don’t know who she is, ask someone vaguely familiar with immigration issues in Arizona. She’s aweful. Might as well be on CNN with Lou Dobbs. Obama’s selection of Hilda Solis as Labor Secretary counteracts the Janet Napolitano pick. The labor folks love it. That is, labor folks with US passports. It seems the only workers worth protecting are those who are “one of us.” Meanwhile, globalization consistently sends capital on a cross-border errand that can’t help but push workers from outside the U.S., toward the U.S.

One thought on “Obama’s Strange Bedfellows”