In the Spring of ’99 I enrolled in a course called Prophecy and Social Criticism at my alma mater, Bowdoin College. Halfway through the class we read Michael Walzer’s book, Exodus and Revolution, which explored the political and ethical implications of the Exodus story.

I remember sitting in my friend Celine’s room with Walzer’s book in hand, and dropping it on the floor when the significance of his words really sunk in. Forgive my inability to directly quote the book, but the gist of Walzer’s argument went thus: Upon entering the land of milk and honey, God’s chosen people found others already occupying their gifted land. Although these people were the indigenous inhabitants of the land, the Hebrews were free to occupy Canaan because the Canaanites were outside the Hebrews’ sphere of moral concern.*

This didn’t make any sense. Why would it be okay for one group of people to take another group of people’s land just because their God said it was okay, I wondered?  That’s like me telling the girl in the dorm room next to mine that I had a revelation about her car last night, and God said he was bequeathing it to me, so she should handover the keys. Of course, she’d look at me like I’d lost my mind and do no such thing. What, then, might be the outcome ? Right, conflict, war, and bloodshed.

(Ever thought about what mass PTSD looks like? Think Native Americans post-European inv

asion. Think Africans in the Western Hemisphere from the 17th century on. Think Congolese in the age of Leopold. Think Jews sequestered to the Warsaw ghetto in the age of Hitler. Think the Japanese in the wake of Hiroshima. Think the Vietnamese under clouds of agent orange. Think Sunnis and Shiites the moment operation “Shock and Awe” got underway.)

I was soon informed that groups who anchored their truth claims, their moral certitude and ethical norms in differing authority figures, particularly differing transcendental authority figures, stood at an impasse that only force could bridge. One version of the truth would force the other version of truth “underground,” as it were. The imposition of one group’s will on the other was the basic recipe for war.

I am reminded of this as I read the New York Times today, as I surf through Al Jazeera online and bounce around the BBC website. What’s happening in Gaza today may not be identical to the occupation detailed in the Old Testament, but it surely shares in the logic of that old story. What troubles me now, however, is the way in which Israel’s justifications for what is all but genocide in name, can gain traction in the public sphere. What kind of psychic space must we all be in to read last year’s “warning” by Israel’s deputy defense minister, Matan Vilnai, without mass outrage being our response? Vilnai told us: 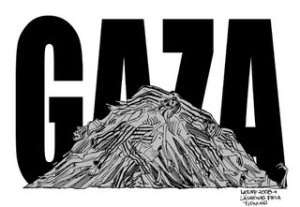 “Palestinians risked…’bringing an even bigger Shoah’ (the Hebrew word for Holocaust) upon themselves if they did not stop firing Qassam rockets into Israel….” [emphasis mine.]

There are many things wrong with this statement, not the least of which is Vilnai’s back door, or accidental, admission that Israel’s actions amount to a Holocaust, but to think that such a lopsided, underfunded, and ill-equipped defense against said Holocaust would be openly regarded as Palestinians “bringing an even bigger Shoah upon themselves” is outrageous. Seriously. Such a statement is delivered as if Israel cannot chose to respond differently; as if exerting more force is the only option.

As I read more reports of Israel’s use of white phosphorous as an “obscurant” in  the densely populated urban area of the Gaza Strip, I  can feel my frustration and sense of helplessness rise up from my belly and circle around my heart. What are we to do, those of us who are committed to peace, compassion and avoiding adding another drop of suffering to this world? It is easy to feel compassion for those who suffer such indignities, but how are we to muster compassion and forgiveness for their killers?

Unlike Walzer’s notion of someone being outside of our sphere of moral concern, and therefore not worthy of our time, love, compassion or care, we must begin to move towards an ethic that leaves no one out and wrestles with the difficulty of building relationships within the interstices of disagreement and on the edges of discrepant world views. Surely, the tie that binds Israel and Palestine is a shared history of suffering, both at the hands of others and each other. A shared commitment to reducing the level of suffering and violence ought to be our goal, rather than the (false) “security” of one group at the cost of the other group’s sanity, genuine security, and ability to flourish in peace.

*In all fairness, Walzer isn’t the only one to make such a claim, or attempt to explain the situation in these terms. For a critique of this kind of reasoning see the work of the late Edward Said, in particular, “Michael Walzer’s Exodus and Revolution: A Canaanite Reading,” in Blaming the Victims: Spurious Scholarship and the Palestinian Question (London: Verso, 1988): 161–78.

One thought on “GAZA”