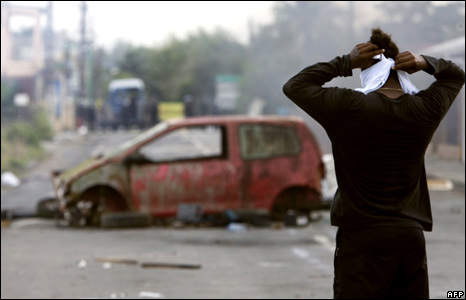 There was a rebellion.

My sense is that when we combine anxious, power-tripping cops with a justifiably enraged, saddened and frustrated community it is a matter of time before something goes down. I know how police talk to people, or better, talk at people, when we’ve assembled to express our grievances. I’ve been on the other side of that baton more than a few times. Theoretically, it is our right to assemble, just as much as it is our right to speak our minds. Yet, the parameters within which we must do so, while under enormous duress, strikes me as soul crushing and meant to shut us up, dishearten us and regulate us into submission. I’m reminded of Louis Althusser’s take on how ideology works to manage and regulate populations. He described institutions as being the primary means through which such regulation occurred, and when institutions failed (or needed shoring up), he said force was always exerted to eliminate resistance, dissent and rebellion. This is what the police call “maintaining order,” an order which would have the dispossessed, forgotten, and disregarded, disappeared as well so “citizens” don’t have to hear the moans and groans of those who keep this system going by functioning as the foundation upon which this unjust system is built.

No person is meant to live on the bottom of another person’s shoe. Every life counts. Each of us is just as valuable as the next simply by virtue of Being. This is a spiritual truth and birthright that the social order may work to ignore, but people know better. And it is from this knowing that rebellions surge. We must see last night’s events in Oakland in this light.

Yes, the people rebelled. And while I do not support violence, or believe it is a sustainable way to move toward effective change, I nevertheless understand how accumulated disappointment, frustration, anger, feelings of powerlessness and sadness erupt into a shitstorm so dissociated from its own effects that people burn down their own neighborhoods. And, even though I argue for a return to Love wherein we, the oppressed, strive to see the humanity in our oppressors and thereby effect a transformation for all of us, moments like this push me to the edge of my own capacity to see the Divine in others. It is hard to Love someone when they have their foot on your neck, or when their baton is cracking the side of your head open. The extreme difficulty of Loving and channeling anger into something constructive should be obvious to everyone, and yet I still believe it is the one thing we must keep trying to do.

I write this from a space of profound sadness, and an awareness that what we are facing as a human community is our own disconnection from our hearts, and from ourselves. Please take this seriously. It’s not neo-hippy, self-help, mumbo-jumbo. It’s the Truth. When we are unable to see others as people who have feelings, who cry, who laugh, who get startled when something falls in the dark, we are revealing that we are not in touch at all. Genuine reconciliation, and peace requires people on both sides of the war line to begin seeing with more compassion. As I hold space for the anguish in my community today, I also challenge us to begin working this difficult edge of Love.