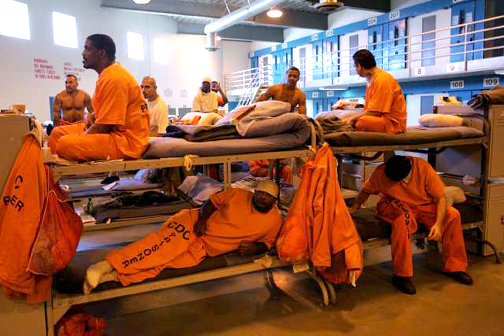 Because it would be too agonizing to cope with the possibility that anyone, including ourselves, could become a prisoner, we tend to think of the prison as disconnected from our own lives….
We thus think about imprisonment as a fate reserved for others, a fate reserved for the ‘evildoers’…Because of the persistent power of racism, ‘criminals’ and ‘evildoers’ are, in the collective imagination, fantasized as people of color. The prison therefore, functions ideologically as an abstract site into which undesirables are deposited, relieving us of the responsibility of thinking about the real issues afflicting those communities from which prisoners are drawn in such disproportionate numbers. …It relieves us of the responsibility of seriously engaging with the problems of our society, especially those produced by racism and increasingly, global capitalism.
–Angela Y. Davis,  Are Prisons Obsolete?

What happens when the “criminal” isn’t your stereotypical “Latino or black guy,” but instead is an agent of the state? For some, sending a cop who’s convicted of murder (in whatever degree) off to prison is Justice par excellence. The “pig” is finally getting a taste of his own medicine, or so the thinking goes. But Angela Y. Davis’ insights above have me wondering what kind of ideological work the Prison is doing when the “pig” is sent to the pen.

If, as Davis notes, “the Prison functions ideologically…to relive us of the responsibility of thinking about the real issues” that are indeed the conditions of possibility for a Grant/Mehserle tragedy to take place, then what are we missing when we call for Mehserle’s imprisonment? Have we missed the forest for the trees? Has our persistent experience of police brutality and mass incarceration reduced our sense of what Justice might consist of to a single conviction? And why do we believe that the Policing/Criminal Justice System/Prison Industrial Complex is now all of a sudden capable of providing viable solutions to our problems?

Needless to say, I’ve been thinking a lot about what it means for communities that are disproportionately policed, incarcerated and terrorized by state violence to call for the incarceration of Johannes Mehserle. My question has less to do with whether or not I believe he is guilty of murdering Oscar Grant. Surely, if there were no elaborate categorical system meant to differentiate between degrees of murder, we’d all still have to concede that he shot a prone, unarmed young man in the back. As such, we’d expect that some form of accountability, and responsibility be taken for his (video recorded) actions. So, my question has more to do with what accountability and responsibility (read: Justice) might look like when we seriously consider – or even recognize – the paradox at the heart of our demand that Mehserle be locked up.

The paradox goes something like this: by locking up Mehserle for up to 14 years we are legitimizing a system that typically and disproportionately incarcerates us. However, if we don’t demand Mehserle’s imprisonment, then we send the message that it is okay for agents of the state to kill people of color, poor people, queer people, and undocumented people with impunity. Furthermore, if we punish Mehserle only, when and how do we raise the issue of all the other agents of the state, from the FBI and their domestic counter-insurgency campaign to local police forces, who continue to terrorize, detain, and murder our loved ones and allies?

Are we, that is, those of us who truly want justice for Oscar Grant, for Sean Bell, for Abner Louima, for Amadou Diallo, for those murdered by the police and racist civilians in the aftermath of Hurricane Katrina, and for countless others,  fetishizing the Prison to our own detriment?

My sense is that this may indeed be the case, such that our overemphasis on incarceration both sustains an industry-institution that captures us daily, while we do little to address the systemic sources of our vulnerability to state violence, state repression and incarceration. I mean, think about it: the Prison Industrial Complex generates nice profits for corporations while draining social wealth, thereby reproducing the conditions that set up a direct line from the playpen to the penitentiary. I don’t believe this is hyperbole. California is a case in point.

My state has the most prisons in the country and, logically the most prisoners. As of today, July 16, 2010, we also have no approved state budget. We have ongoing cuts to social services; deep cuts that disproportionately affect the elderly, the sick, the poor, and communities of color. We have one of the worst public education systems in the country, coupled with a university system that has raised fees consistently since 2001 while cutting academic programs (disproportionately in the Humanities and Social Sciences), and faculty and staff salaries. We have a Governor who refuses to levy taxes on oil extraction even though California is the fourth largest market for oil extraction in the country – taxes which many argue would effectively make up the fiscal shortfall. And all of this is happening while we watch gubernatorial hopeful, former Ebay CEO Meg Whitman, spend upwards of 71 million dollars OF HER OWN MONEY on her campaign so she can turn around and do the same thing. These are just some of the interlocking social conditions that impoverish our communities, destroy ecosystems, ravage mental health, trigger substance abuse, dismember families, and obliterate genuine and fulfilling opportunities for millions of young people.

I began with Davis’ epigraph because I believe it is as relevant for those of us who come from targeted communities as it is for people who are in positions of privilege such that they can gaze at the ‘criminals’ from afar. If any substantive form of Justice is to be experienced by any of us, we must look at the paradox above very closely and begin to demand for systemic change, rather than one-off convictions. We must eliminate, uproot and transform the conditions of possibility for state violence, rather than punish individual cops when they slip up and get “caught” for the violence they routinely visit on our communities.